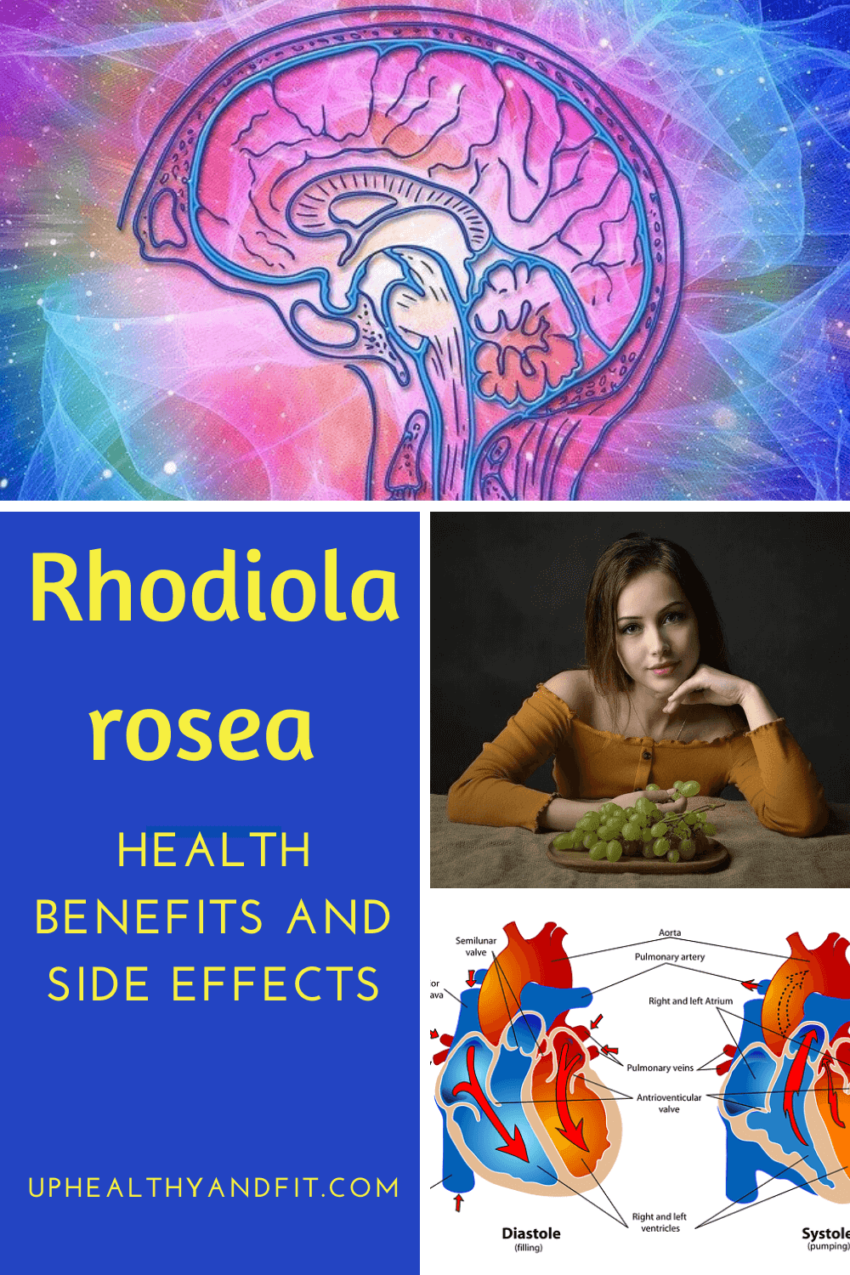 Rhodiola rosea: what is it?

Rhodiola rosea is a medicinal plant belonging to the family of Crussulaceae. Native to Siberia, it is widespread in Mongolia as well, and grows spontaneouslly in the montaineous regions of Northern Europe, Lapponia, Scandinavia, Northern America and Alaska. Rhodiola rosea leaves are thick and fleshy, and its flowers color ranges from yellow to orange, are very fragrant and look like a little rose (the name Rhodiola rosea actually means “little rose”). In this article I am going to be dealing with Rhodiola rosea health benefits and side effect. Are you ready? Let’s get started!

The therapeutic use Rhodiola rosea was much known even in distant times. It was used in ancient Greece, where Rhodiola rosea was even mentioned in a medicine treaty (“De materia medica” by Dioscorides).  The Vickings consumed it as an energiser after intense physical exertion. In China, whereas, the entire dynasty of Chinese emperors treated lots of issues with Rhodiola.

In Tibet the ancient local populations consumed it to better adjust to altitude and rigid climate. In Siberia, beside being used against winter cold temperatures, legend had it that if you drank its infusion everyday, you would live longer than one hundred years; what is more, Rhodiola rosea root was given away to newly-weds in order to propitiate the good health of babies.

In the 1400’s the Ukranian prince Galitski, famous for being a great lover, used Rhodiola rosea as the main ingredient in the recipe of a love potion. In the past, all of its parts were used (roots,leaves, flowers) to improve physical and psychological wellbeing and its beneficial properties were handed down orally.

Nowadays, whereas, Rhodiola rosea is largely used only for its root. Also known as “golden root” or “Arctic root” is used above all for its reinvigurating properties and its beneficial effects are scientifically backed-up. Let’s see now what its many beneficial properties are.

Among Rhodiola rosea active principles we find glucosides, organic acids, tannins, flavonoids, polifenols etc. Salidroside is the most pharmacologically active compound. This glycoside is found in Rhodiola rosea root, called rhodiolosyde and is known under the name rhodosyne. Taking it, boosts the production of serotonin, adrenaline and dopamine, thus enhancing mood with an antidepressant effect, boosting cognitive functions as well and promoting heart, liver and muscle metabolic functions, without any side effects. The organic acids and flavonoids contained in Rhodiola rosea ensure it its antioxidant benefits.

La Rhodiola rosea is a plant with tonic and adaptogenic benefits, like Eleutherococcus senticosus and Ginseng, as it helps and supports the organism to react properly under psycho-physical stress situations; it is  effective in assisting the body to adjust to changes and tapping into its energies to the best. What is more, it boosts the immune system, improves endurance and the response to fatigue, helping the body either physically or mentally. Rhodiola rosea has an energising and reinvigurating effect, above all since it helps to cope with fatigue.

Rhodiola rosea is a valuable anti-stress: it helps to recover from physical and mental fatigue related to challenging times that cause nervousness. In this respect, it acts on the sympathetic system, against anxiety and depression, boosting serotonin (which is a brain chemical responsible for the sense of wellbeing) and tackling the harmful effect of cortisol, which is secreted by adrenals in situations of anxiety and stress.

Rhodiola rosea has a tonic effect on the intellect, as it boosts memory and concentration due to its action on both dopamine and adrenaline; it reduces mental fatigue and enhances attentiveness. What is more, it boosts brain functions as a whole, increasing mental clarity and proactivity.

This beneficial plant is a good remedy to counteract insomnia, as it reduces falling asleep times and improves sleep quality, due to its ability to reduce stress and physical and mental fatigue, which have a key role in preventing the necessary muscle relaxation to fall asleep.

Rhodiola rosea is a natural anti-fatigue

Rhodiola rosea counteracts fatigue, since it boosts muscle tone and endurance in the body, reducing recovery times and enhancing physical performances. What is more, it promotes protein synthesis and, as a consequence, muscle regeneration.

Rhodiola rosea boosts white blood cells and the immune system against both viral and bacterial infections. What is more, it counteracts cell aging and free radicals, due to the antioxidant action of flavonoids which are packed up in Rhodiola. In this respect, rhodiola seems to have anti-cancer properties, since it may promote cellular DNA repair.

Rhodiola rose is helpful if you suffer from low blood pressure and tachycardia: it soothes the heart, and protects the cardiovascular system from anxiety and stress.

Rhodiola rosea is a valuable remedy if you are overweight, as it boosts metabolism and burns out fat. What is more, it counteracts emotional eating and, due to dopamine, re-activates the “brain switch” which sends “satiety signals” to both body and mind, thus tackling bulimia.

Rhodiola rosea is also aphrodisiac, as it battles anxiety and boosts sexual drive, also due to a better blood flow to genitals. Then it may solve performance anxiety in men and boost fertility and hormonal levels in women.

On the market you can find Rhodiola rosea supplements in the form of capsules or tablets. The average dose is 100-170 mg a day, preferably in the morning, for one or two months.

Rhodiola rosea doesn’t have specific side effect, though if you take it larger doses it may cause insomnia and irritability. Avoid taking it during pregnancy and nursing. Don’t administer Rhodiola rosea to children.

It is always advisable to seek medical advice instead of having recourse to self-prescription, above all if you suffer from specific pathologies. It is not recommended to take Rhodiola rosea if you suffer from heart issues or high blood pressure, or emotional break-down. Don’t not take Rhodiola rosea if you are on drugs like antidepressants, anxiolytic and barbiturates, as it makes them uneffective and increases their side effects.

it boosts the immune system and battles free radicals; it is a valuable remedy for insomnia and improves sleep quality; it promotes weight loss as it inhibits emotional eating; it has an aphrodisiac effect on both men and women; it has a cardiotonic effect, since it protects the cardiovascular system from anxiety and stress.

Rhodiola rosea doesn’t have specific side effect, though if you take it larger doses it may cause insomnia and irritability. Avoid taking it during pregnancy and nursing. Don’t not take Rhodiola rosea if you are on drugs like antidepressants, anxiolytic and barbiturates, as it makes them uneffective and increases their side effects.